Greetings folks, it has been sometime since I've had anything relevant to write.

GLASS THROAT RADIO
Episode IV (November) of the Glass Throat Radio podcast was published. However, I was unable to afford a December showcase. Podomatic will soon be deleting earlier shows in order to allow space within my account. So for those of you who may have missed out on the first couple of shows, feel free to get in touch and I'll send you a show of your choice. For those of you who care and would like to see this humble little show continue, please feel free to click the Paypal Donate button within the podomatic page to keep things going. Hopefully I'll be back come the new year? That now depends on you...We shall see.

FILM
On a different note, I've been asked to contribute a couple of songs from my own 2006 release of "Moss and Memory" towards a feature documentary entitled "Goodwin's Way" from Director Neil Vokey. The film is currently in production and I'm deeply honored to help score such a project. I can only hope our connection will blossom towards future endeavors. Perhaps video work, which has already been mentioned regarding my own Blood of the Black Owl spirit. Time will tell. Thank you Neil.

MUSICAL CONTRIBUTIONS
Recently I've contributed guest spots on three upcoming releases and one recently released album. That album is the second full length offering from Seidr entitled "Ginnungagap." I offered vocals for the ending half of the last track entitled "Sweltering II: The Pale Blue Dot In The Vast Dark."  I want to thank the band for believing in me to handle such a tremendous task. I'm humbled. You can find their album here.

The first of three upcoming releases hail from Portland Oregon's Weather Veins. Henry Lauer's debut full length album is currently in production and it was an honor to have been asked to share in something so deeply personal for Henry. Thank you brother. I performed a minimal amount of Galdr and Hammered Dulcimer within this collection.

The second is yet another debut full length album currently in production. I was honored to contribute Voice and Flute to Of Hearth & Home's currently untitled offering. Of Hearth & Home is the solo acoustic work of Australia's Robert Allen (Encircling Sea, Vaiya). Thank you Rob for allowing me to share. What an honor.

Last but certainly not least, I was asked by brother Pythagumus of novemthree to contribute towards the two songs I performed live with them years back. Both songs "Embracing The Storm" and "This Is My Home" will feature as a part of a vinyl split with Spain's amazing Sangre De Muerdago. The offering is entitled "Braided Paths" and I humbly offered Galdr, minimal guitar and Hammered Dulcimer. I plan to stock all of these releases when they become available here.

BLOOD OF THE BLACK OWL
I've recently felt tremendously inspired and have found my spirit deep within my sacred space. The journey and process of lifting the veil to find the heart has yielded intense experiential practice full of human growth, being and deep magical development. The sound console and recording space have become more of a conduit in this process than ever before, offering the gifts of a different kind of medicinal musical. Perhaps a sensible progression one might say from the "Light The Fires!" collection, yet a progression to be quite unexpected from the spirit known as Blood of the Black Owl. The vast majority of this collection, finds raw and stripped down acoustic works to be offered. I'm excited to announce I have finished six crafts thus far, under the album's banner of "Skadwojanan Sehwanan."

There are currently more crafts being written and recorded for this collection. So this is in NO WAY a complete album listing. Song placement is subject to change as the record develops. 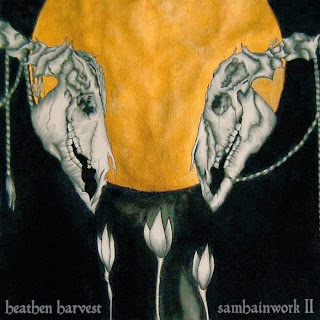 Regarding "Skadwojanan Sehwanan", I'm unsure as to where this collection will find a home, I'll get to that bridge in time. Currently I'm feeling it's appropriate to release it myself. With that said, I'm also unsure of the formats for which this collection will be published through. I know what I wish for, but that's up to the publisher/label's budget. I can't imagine most will want to take a chance on this one anyway, so we shall see.

MERCHANDISE
There will be t-shirts, sweatshirts, patches, etc. available through the Glass Throat Store exclusively come next year, as I'm in the process of figuring out what that exactly entails. My apologies to those of you who had asked for a "Light The Fires!" design to coincide with the album. That clearly never came to be. The new designs will represent the sigils and vision for which Blood Of The Black Owl seeks currently. Also, look for the very first Cedar Spirit t-shirt and patch design as well.

IN OTHER NEWS
With that said, Cedar Spirits will hopefully begin to focus on live performances in 2014 as well as material for a new album. More to come.

The Elemental Chrysalis is still active and recording our first collection of songs in seven plus years. The album is entitled "Feathers Of Lunation" and James and I are roughly half way through the recording process. More to come.

There will be a severely needed retreat come January where I'll spend some lengthy time within the Olympic National rain forest. Among other things, I'll be filming for B.o.t.B.O. as well as recording new Cycle Of The Raven Talons within the wild environment.

Thanks to those of you who actually read all of this. My warmth to you all and have a beautiful Yule.

Chet, thanks for the great work on the podcasts. You've managed to turn me on to some new music with each show. I just sent a small donation your way. Take care, my friend. Wassail and god jul!
-Jeff

WARmth to you both guys and thanks for all the support. Hope this new cycle brings much for you both. Jeff, so what did you think of the latest episode? Lots of oldies played and Dedicated to you! :-)