Last week a few lucky souls were treated to an intimate live show from the mighty 40 Watt Sun. Terrorizer’s José Carlos Santos was in attendance, and here’s what he thought…


It’s been a week since this little unassuming acoustic event took place, but nevertheless its effects have been immense and surely all those present that filled up the Black Heart are still reeling from it, so a week’s spiritual retreat was needed before putting pen to paper with any sort of professional distance to it.

Because 40 Watt Sun appearances are few and far between, there is a tangible air of anticipation in the air as the hour approaches (particularly because we’ve been promised new songs on top of everything). 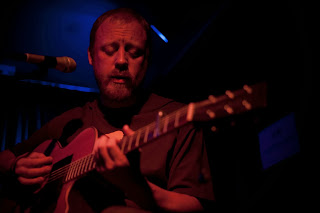 With hearts collectively skipping beats, the quiet and shy-looking trio of Patrick Walker, William Spong and Christian Leitch launch into new song ‘Marazion’ without so much as a previous word, and the impact of its aching beauty is immediate – though no one has heard the song before, lines such as “I’ve loved you more than that” are already felt as old favourites due to the band’s elegant, sparse and deeply heartfelt performance. Such is the case for the other three new songs unveiled tonight, all of them already feeling like old favourites to the enthralled, silenced audience. Unlike most metal or metal-related gigs, the connection between musicians and audience is established without the need for any verbal encouragement, and that bond is even stronger due to the intimate acoustic (or semi-acoustic, as William’s bass is electric) setting, and there are more than a few sneaky tears being wiped from faces as the familiar ‘Restless’ and (especially) ‘Carry Me Home’ echo through the crowd.

After this, nothing could be more perfect for an encore than a version of Songs: Ohia’s ‘Lioness’, simultaneously a fantastic last reminder of why 40 Watt Sun are one
of the most essential bands in the English underground today and a classy homage to the departed Jason Molina who left us last March. He would have loved it.