Hey folks, here are some reviews for the debut full length deluxe CD released on Glass Throat Recordings. Hopefully said reviews will help those of you still interested in actual copies, to PLEASE come buy one. There are plenty of them in stock! A tremendous amount of warmth to Henry Lauer, Oscar Strik and Black Magazine (Germany) for spending the time to showcase such beautiful support towards such a humble little offering.
Honored we are! 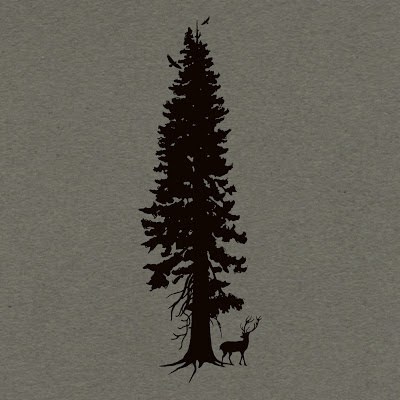 ***HEATHEN HARVEST*** (5 out of 5!)
Cedar Spirits is a new being, a life brought forth in (as always with Glass Throat Recordings) magnificent 6” x 6” deluxe gatefold panel CD packaging. The artwork – silhouettes of humanity and nature – hints at a voyage into a place of darkness and of joy. A place of verdant life and rich earth. Of healing, death, and transformation. Of submission, supplication, and becoming. As such, it holds up a flawless mirror to the music contained within.

A word or two must be said as to the creative identities behind Cedar Spirits. A more potent combination of artists could not be imagined – Pythagamus Marshall of Novemthree in alliance with Chet W. Scott (Blood of the Black Owl, Cycle of the Raven Talons/Ruhr Hunter, The Elemental Chrysalis, etc) and Rachel Boaz-Scott (for whom Cedar Spirits represents a stellar musical debut).

It is difficult to fully articulate the importance of these musicians to the world of underground music. Their separate musical projects have been important vessels of inspiration for many years now, and the confluence of their talents as Cedar Spirits is truly spell-binding.

Cedar Spirits is woven from the familiar threads of its contributors’ more well-known output: acoustic instrumentation, nature recordings, beautiful singing, brooding atmospheres, and subtle arrangements. They draw together a remarkable mixture of folk, tribal, and ambient elements into a single, flawless whole.

The album is flush with songs that, at surface, seem like the still water of a lake: simple, transparent. Yet deeper exploration sees them open into great intricacy. This simultaneous simplicity and complexity creates an irresolvable tension for the listener, which in turn leads to the collapse of the ego and the embrace of wholeness as a psychological state.

As such, this album feels like both gossamer dream and rooted awareness. The melodies and words convey a tender humility and profound adoration for the natural world. The organic instrumentation and unvarnished perfection of the production draw the listener away, and down, and under, and through, and beyond. Cedar Spirits is a door into another world, a world of dark boughs and watchful beasts, of humanity attuned to the intimate pathways of forest and stream.

This sonic voyage is akin to that of water rising from a natural spring. Out of chthonic gloom it ascends, seething and bubbling until it bursts forth, life irrepressible. Cedar Spirits bares the wounds and suffering of its creators quite nakedly; but it transposes that pain into something humble and sublime.

The closing track, “Wild Serenity,” perhaps best captures the spirit of the album as a whole (note the flawless contradiction of its title). At turns soundscape, instrumental narrative, folk song, and atavistic hunt (Rachel’s shrieks are beautiful, exultant, and terrifying), it conjures a refuge from the poison and banality of this modern world, a healing circle that nevertheless is also a healing journey, a process which allows even loss and pain to assume a sacredness and a rightness.

Such an achievement is all too rare, and speaks to both the artistic brilliance and the spiritual courage of its creators. There is more of both darkness and light in a second of this music than in many musicians’ entire discographies. Its ultimately positive spirit – not of denying darkness, but of accepting it and therefore allowing it to grow into something more – is a healing balm.

***EVENING OF LIGHT***
Although the collaboration had been a few years in the making, it was still a pleasant surprise when this album – created by Pythagumus Marshall, Rachel Boaz-Scott, and Chet W. Scott – finally arrived. The first thing that strikes me, as usual with Glass Throat albums, is the flawless packaging, a coarse grey-on-grey, 6×6″, six panel gatefold.
All of it, including the music of course, takes us deep into the forests which form the spiritual homeland of these artists. Perhaps most directly that of the Pacific Northwest where they are based, but universal enough to speak to anyone who feels a bond with leafy giants. The sounds of the Cedar Spirits are elemental, drenched by rain, warmed by the sun, in deep connection with the woodland soil.

On an ambient level, it’s the peaceful field recordings on this album that really transport me mentally to the intended setting, but add in the ritual neofolk – a logical middle ground between related projects novemthree and Ruhr Hunter – and the real spirit of this album comes forth. Melody is in the guitars, dulcimers, and psaltery, with touches of ocarina, harmonium, and other support instruments. Deep skin drums provide the basic pulse in most tracks, with bells and bowls providing perfect metallic tones where appropriate. The voices of all three are as always: suitably rough, untrained, but fully dedicated. The mood of the music shifts with the weather: from deep, wet, and dark pieces to more animated, sunny hymns.

There’s a lovely, distinctly modern pagan feeling in Cedar Spirits, one that leans less on man-made tradition, and more on a direct communion with the environment, channeled through a uniquely American musicality that combines influences foreign and native. It is perhaps precisely what you’d expect to hear from these artists, fated to work together at some point, but that doesn’t make it any less impressive. Possibly the best bit of wyrd witchery you’ll hear this year.
_____________


***BLACKMAGAZIN.COM*** (Translated from German)
Mystical and mysterious to give the musicians CEDAR SPIRITS. From the modern digital world, and they do not seem to hold much. Thus they reject any webpage, Facebook page or other "modern" channels to contact us. Only he who cultivates his passion for the traditional neo-folk label "Glass Throat Recordings" and frequently drop by on their Bandcamp page is powered by new releases from the deep forests of North America. Too bad, because you have to say - because their eindächtig introspective and self-Pagan folk may well also make strange music genre with friends for listening and snug - Attention phrase - even save lives in the best case!
CEDAR SPIRITS are artists from the Pacific Northwest of the United States, which are known in the neo-folk community among their evocative projects "novemthree" and "Cycle Of The Raven Talons". With their joint collaboration they bow respectfully to the beauty of nature, realize their vision of thereof turned and daring in itself Ritual Folk, apologize to all the forest spirits for the destruction of the planet and bow to its green beauty - the smell but strong after wikka cult? In nine beautifully-Spartan acoustic ceremonies, the project invites a nature-loving encounter, be begleitetet the recordings in places of autonomous field recordings from the idyllic forests of their homeland, which together with the beautiful vocal melodies and ambient-like tribal passages an atmospheric whole.
"To the keeper of the woods, under moonlight Stood, deep within your earthen womb ....please forgive us "
Purist instrumented with acoustic guitar, harmonica, ocarina, flute and bass minimalist use to simulate a fictitious walk in the woods the music in tightly closed eyes. The elements of percussion remain clearly in the background. And really - you think you smell the forest and its pine needles to feel the morning dew on the legs and longed for "Keeper Of The Woods" atmospheric cracking the thicket - and this is the best will in no more romanticized, stylized phrase. Peaceful and calm stiftend call CEDAR SPIRITS the return of man to nature, and ye same-titled ambient masterpiece "Soil" (Anspieltipp!) is characterized by deep compassion and spiritual nature spells and can in repetitive consumer replace the weekly yoga class in the turbulent city life. CEDAR SPIRITS is a very special band, which is a very special album that is not just another neofolk band with a conceptual twist. Here you can feel every note of his deep affirmation of life.
Moving!(Dimitrios Charistes)