GLASS THROAT RECORDINGS (Next 3 releases plus an interview with Blistering.com!) 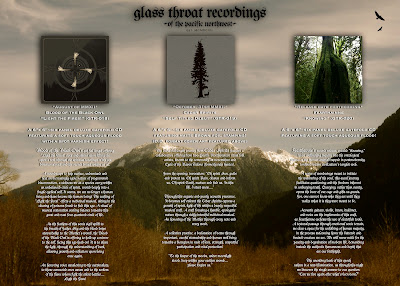 An honest shock if there has ever been one, Blood of the Black Owl’s Light the Fires! caught us unexpected with its ritual vibes and earthy opulence. Though initially coming off as quite peculiar, repeat listens revealed a carefully constructed and ultimately overwhelmingly atmospheric walk into the abyss of the outer wilderness.

“Band” mastermind Chet W. Scott was kind of enough to engage in an eloquent chat with me over his history, inspirations, and all manner of idiosyncrasies that make Blood of the Black Owl the enormous beast that it is.
-Blistering.com