CYCLE OF THE RAVEN TALONS (Press Release forthcoming album "An Offering to Mystery: A Medicinal Musical Part I"

"The integration of medicine-wheel consciousness into daily awareness brings medicine-wheel teachings and power into the moments beyond ceremonial occasion. When this happens, the wheel is more deeply experienced as a mandala that can guide ordinary outlook into sacred awakening."

***UPDATE***
"An Offering to Mystery" is now being considered for a DVD/Blu-Ray format due to the lengths of each coinciding ritual piece. Not to mention the formats optimal sound quality. This is not confirmed as things still need to be worked out. But I'm looking at the potential of 4 hours of craft here.

For the first time anywhere folks, I'm deeply humbled & quite honestly overwhelmed to officially set this in motion, announcing to the world the first medicinal musical offered under the new moniker of Cycle of the Raven Talons (Formerly known as Ruhr Hunter). Over six years in the making now since the release of "Moss & Memory," I will look to complete this offering come MMXIII. I have provided cover art, which I imagine will not come as a shock to most of you, as well as the title & track listings for the double CD release. Each disc will be roughly 70+ minutes in length & in addition to the standard Glass Throat six panel gate fold, "An Offering To Mystery" (A Medicinal Musical Part I) will also be packaged within a limited edition Grandfather Elk (Moose) hide sleeve, hand sewn & adorned with my sacred Raven talon sigil. This version, like the "Moss & Memory Den box" in 2006 will be exclusively available through Glass Throat Recordings only. My brother Jason Craban over at www.laughingcrowe.com will craft these sleeves & I'm honored to collaborate with such a visionary & beautiful spirit. Jason had also crafted the full Moose hide banner that some of you may remember from my first live ritual back in 2009. I'd also like to mention along with Rachel's wonderful & deeply moving assistance within this work, there will also be (for the first time) a guest musician handling some of the Northern ritual elements within the four quartered perspective of this musical wheel. I can say this individual has been a HUGE inspiration & guiding light since 1990. I've never felt such an honor, a blessing, the energy forged will certainly make my heart sing & help strengthen the balance of this sacred offering to Mystery.

Thanks for your time folks, much more to come...
--Chet W. Scott 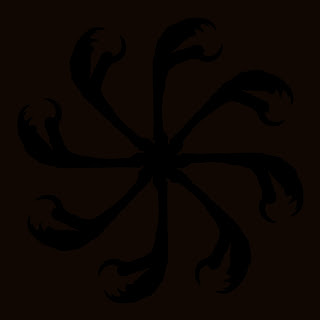 
"Often in moving on a spiritual path obstacles arise, seemingly becoming larger and more frequent the further you travel. Spiritual maturation is not an absence of difficulties. It is a deepening of equanimity that uses difficulty to guide awareness to what needs attention or healing."
Posted by Chet W. Scott at 1:45 AM

Well, that's exciting news indeed! I'm glad to see the spirit of Ruhr Hunter lives on :) I saved the "Moss & Memory" den you made for me, until the time was right earlier this year, it was quite an experience - sound, sight, and scent. Is the GTR website catalog up to date? I've been meaning to drop off an order one of these days...

Hey Ben, good to read from you & thanks for becoming my first ever comment! :)

I'm so glad to know you found a connection within the craft as a whole experience. I'm honored & deeply humbled to see you take that journey brother, thank you for the time & respect.

Well, for the most part yes the catalog is up to date. A few things, Fauna's the Hunt is no longer available through me. However, in its place I now have Echtra's (one half of Fauna) Paragate CD which clearly I have yet to add. You can gather further info. on this release within an older blog posting & the price is the same.

Also, I only have one B.o.t.B.O. "A Feral Spirit" shirt left size XL. I have two "A Banishing Ritual" shirts left size XL as well. I never had a chance to post these within the catalog as they flew out the door that quick.

I'll be posting up some new distributed items here within the blog very soon including the remaining stock of Cycle of the Raven Talons t-shirts.

Let me know if I should hold on to anything for you Ben.

My warmth & respect,
thanks for the interest & support.

I want that CD, I am willing to pay any price !