CYCLE OF THE RAVEN TALONS...

Formerly known as "Ruhr Hunter", it was recently brought to my attention that an article entitled "Different Folks" features a portion reflecting the top five "Neo-Folk" albums that would appeal to a Metal audience & yours truly was listed as #3. Authored by R. Loren & published in the recently released 2011 October issue (#84) of Decibel magazine (Cover below)...IN STORES NOW! 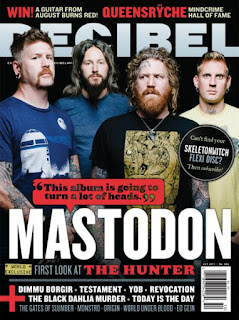 1. The Moon Lay Hidden Beneath A Cloud  – “The Smell Of Blood But Victory” (Arthur's Round Table)

The revolutionary, yet criminally unrecognized duo of multi-instrumentalist Albin Julius and vocal accomplice Alzbeth braid a brilliant fabric coupling old world instrumentation with samples and chanting to carve out the most cunning arrangements in the genre. Though the casual listener might liken them to a more militant Dead Can Dance, their approach to songwriting and ability to integrate such an eclectic array of textures best mirrors the broad artistry and spectrum of a band like Swans. Tracks are all untitled, a pattern which continues to this day in Der Blutharsch, an equally enchanting and progressive amalgam that arose from the ashes of TMLHBAC when Julius and Alzbeth parted company.  Though out of print like the rest of their catalogue, “The Smell Of Blood But Victory” is their finest moment.

2. Death In June  – “But, What Ends When The Symbols Shatter?” (New European Recordings)

Often the subject of controversy, and banned from numerous cities around the world, DIJ seems to be at once received as the poster child for musical hate crime, and the band that people tolerate as the catalyst to a brilliant shift in the musical paradigm.  The latter has allowed them into the canon of pioneers that continue to inspire many artists today. This milestone is the band’s definitive moment, a dark study in ambiguity, where lyrics and music both consider a world where popular archetypes and cultural comforts are removed. The aural appeal of the album rests in DIJ’s ability to present the dichotomy of light and dark through tone, emotion, and instrumentation. Even at its most bleak, the album is still shimmering in beauty.

From visionary Chet W. Scott there are many branches: Glass Throat Recordings, Blood Of The Black Owl, The Elemental Chrysalis, and the subject of this brief narrative, Ruhr Hunter. Chet is hands down the most important, and most unsung musician operating in the Northwest. Those fortunate enough to be familiar with his deeply personal works know that Chet embodies his music. Since 1998, Ruhr Hunter has operated with a vast array of instruments old and new, none of which would be considered traditionally “metal,” yet with these tools he is able to create a sprawling, thunderous, dirge that is unparalleled.  Silence and nature are woven as instruments, and dynamics sway from a whisper to moments of Neurosis-like enormity. Considering the far reaching nature of his influence, and the refreshing sincerity that defines his many projects, I am constantly perplexed by how little the press has documented his work.

A perfect illustration of Current 93 at their most stripped down, and most accessible, this album marks more than a decade’s shift from the 1984 iconic noise bludgeon Dog’s Blood Rising, and exemplifies the extreme range of David Tibet’s stylistic palette. Think of this album as poetry- there are fewer words on the page, but the depth increases through Tibet’s masterful shaping of the musical elements to realize a sparse beauty that few of his contemporaries can achieve.

With the elements of drone, birdsong, and swollen textures becoming more prevalent in newer branches of metal, the lack of traditional structure to this atmospheric record by IGR seems more relevant now than when it was first released. Picture not the blazing orchestrations of a band like Agalloch, but the essence that radiates from such a band when an album ends and its resonance begins. The atmosphere in that very space is where the mellow soundtrack of IGR’s artistry takes shape, ready to lead you barefoot across the Earth.
Posted by Chet W. Scott at 12:31 AM

Email ThisBlogThis!Share to TwitterShare to FacebookShare to Pinterest
Labels: CYCLE OF THE RAVEN TALONS