BLOOD OF THE BLACK OWL...

"Light the Fires! is at once, calling in desperation for a communal manifestation! The collective awakening of an inherent connectedness to all & the crucial ignition of need fire. A sacred flame lighting the path & re-connecting the primal spirit within us all. For the time has come, as our folk look upon these final days, spiraling towards a new age. It is this spirit, battered & bruised, suppressed & spiritually bred out, that belongs to no particular gender, race, age, system or path. Its only prerequisites are awareness, dignity & respectful participation...Listen...Act...Rise & Shine oh beautiful flames!"

In BLOOD OF THE BLACK OWL news, a fourth full length collection entitled "Light the Fires!" looks to be released sometime during mid year 2011. No official release date has been set & I'm quite humbled to announce that both www.bindrunerecordings.com & www.handmadebirds.com will join together in sending this voice out into the void. The collection will be released as a deluxe spot UV, "Old Style" Stoughton 5" gatefold CD. A double 180 gram 12" Stoughton gatefold LP, will also be made available through both Bindrune & Handmade Birds later on this year. The vinyl will feature an exclusive opening ritual to the format. Please view the teaser trailer here:

A look at the overall cover sigil for "Light the Fires!" & the format(s) track listings can be found below: 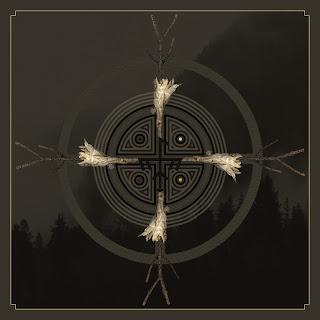 BLOOD OF THE BLACK OWL'S "Light the Fires!"


FINALLY I'm really excited to announce there will also be a CD split with James Woodhead's AT THE HEAD OF THE WOODS spirit released this Autumnal Equinox via www.handmadebirds.com. The release will feature an exclusive 25 minute composition from both James & myself. Both of which were captured during the "Banishing Ritual" sessions respectively...Track listings:


AT THE HEAD OF THE WOODS
"Here I Stand" (24:24)
BLOOD OF THE BLACK OWL
"Visions Of Strix Nebulosa" (25:19)
James will be crafting exclusive artwork for this release & we master these two offerings early this July with Mell Dettmer once again! More to come folks...
Posted by Chet W. Scott at 12:54 PM

Email ThisBlogThis!Share to TwitterShare to FacebookShare to Pinterest
Labels: BLOOD OF THE BLACK OWL